Basia is in many ways a typical Silicon Valley resident. Originally a city girl from Krakow, she arrived in the Bay Area to be with her Polish American husband. Now a mother of two boys aged 5 and 7, and working at a startup, her story is the all too familiar one of juggling the Bay Area commute, school runs, motherhood, and career. But there is one thing that is a little different, her love of Alaska and unexpected passion for the adventure that is dog sledding. All discovered on a short break to Alaska to reaffirm her identity as not just a parent.

After a few short trips to the area, Basia now hopes to take the adventure further by taking part, in the Fjallraven Polar, but to take part she needs your vote. The Fjallraven Polar is a 300km dog sled race that aims to prove anyone can do anything, no matter how ordinary they are. But Basia is far from ordinary and we’re definitely inspired, if you feel the same, and would like to send Basia on her adventure be sure to head over to the website and vote!

Here she tells us her story:

Everyday Life in the Bay

If anyone had told me 15 years ago that I would be dreaming of spending all my free time up north, in the snow and running dogs, I would have laughed in their face. I never considered myself particularly outdoorsy – I grew up in a big city, never owned a car, spent all my free time going to the movies or art shows and translating Latin poetry throughout high school.

All of that changed a couple of years ago. At that time, I had been focused mostly on raising my two kids, balancing parenting and working. Living in Silicon Valley offers many fantastic benefits – it’s beautiful, full of opportunity, smart people, sun, and plans. But it’s fast. So fast, that at some point I realized that I had lost myself somewhere along the way in the chaos.

And then, I went up north. Alaska in the winter was just for fun and strictly touristy: hunting for the northern lights, soaking in hot springs, walking with reindeer and a brief dog sledding tour. In a true Silicon Valley fashion – a lot of experiences in a few busy days. I had a great time, the pictures looked great and then we went home.

Something changed though. I kept thinking of the snow-covered peaks, the piercing cold that wakes you up and freezes your eyelashes, and of standing on the runners and being one with nature. I went back a couple of months later for a few days of snow camping and mushing along the Denali Highway and then a year later to explore McCarthy and the area near Wrangell St Elias National Park.

I’ll always remember the excitement when we were getting ready to take off with the dogs after 9 hours driving. It was a thrilling experience but once the excitement and adrenaline wore off I realized that I had signed up for something that I had never done before and knew nothing about. I was terrified but there was no turning back.

I was hooking up a team of super hyper Alaskan huskies, packing up the sled with straw, tent, food, extra gear and learning on the fly. Before I knew it I was on the runners behind a team of happy dogs who were doing what they were meant to do. I had never driven my own team – I’d been on the runners before and knew what to do more or less but now, I was on my own. We were near McCarthy, AK, in the middle of the forest, it was pitch black and all I had was a headlamp and a team of very excited dogs. A few last minute checks, snow hook up and off we went. It was the most intense and exhilarating feeling I had ever had. I had never been so focused: on not letting go of the sled, following the trail, not taking turns too tightly. We were going on top of the Nizina River and I barely managed to stop before getting a really cold bath when I noticed the ice was breaking up.

I had so much adrenaline going through my body that I don’t think I realized what was happening. I was in my element and after a while and a few more turns I calmed down. I was exactly where I was meant to be and the world around me was calm and beautiful. Nothing else mattered. It really did feel like I was in an alternate reality. 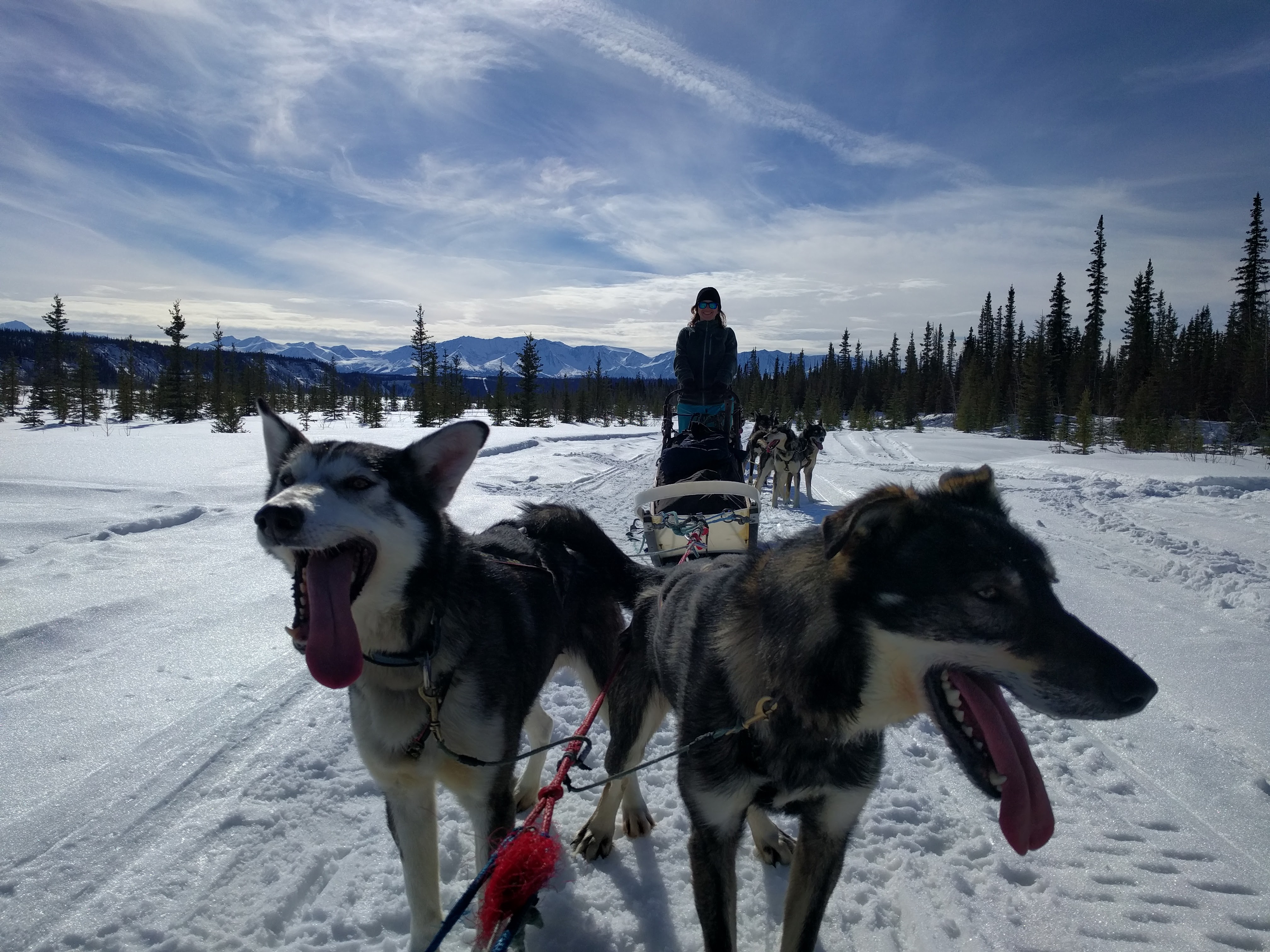 After a few hours, it was time to set up camp. We were close to a river that was breaking up which was great as it provided us with unlimited water for ourselves and the dogs. Slowly, we stopped and got to work. Surprisingly, it was harder than expected. Dark, cold, everything covered by a few feet of snow. It took us forever to set up camp, feed the dogs, make fire, make dinner, and make sure we were all safe and ready for the cold night.

Both of my trips were full of beautiful, hard to describe moments: visiting the old Kennecott mine by dog sled, camping on the Nizina River, the two teams of dogs howling at a full moon or a young pup barking at his echo in the middle of the night. Sunrise coffee and the most intense white and blue everywhere. Or a breakfast with a good friend, when one of the dogs decided to join in with his newfound snack – a moose leg.

Alaska has become much more than an amazing outdoor adventure for me. It was a time for self-exploration and reflection. Being there, stepping way out of what I thought my comfort zone was taught me a lot. I found a sense of peace and self-confidence: in my own decisions, plans, and feelings. I was full of joy and realized I was much stronger, both physically and emotionally than I had given myself credit for. That I could do hard things. It was like waking up from a long dream only to find out that reality can actually be pretty amazing too.

Find more opportunities to explore right on your doorstep with our outdoor California guide. 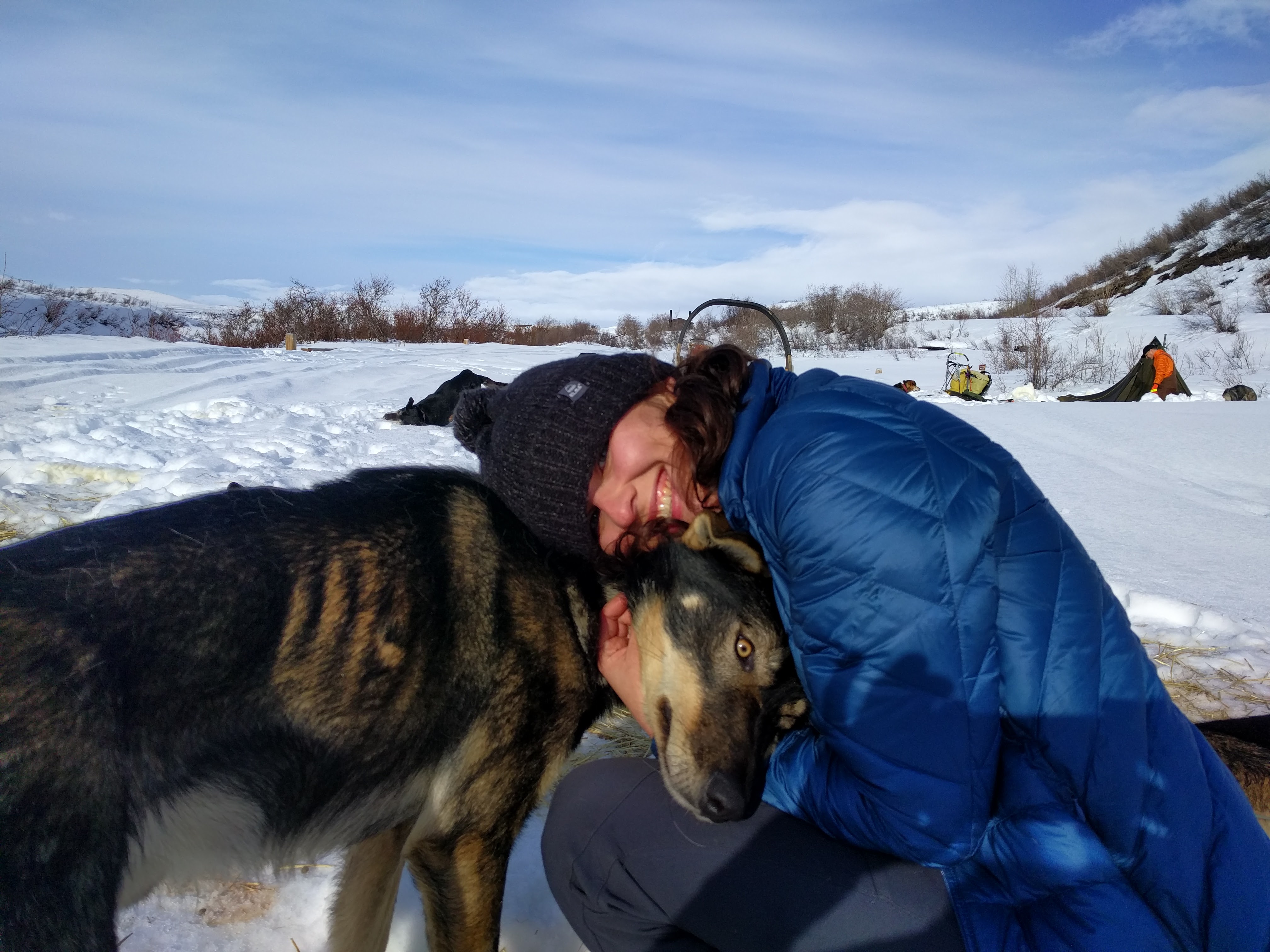 Since then the challenge has been finding that sense of peace, balance, and confidence in everyday life: while taking the kids to school, commuting, navigating work drama and career decisions. When in doubt, I try to go back in my mind to that time spent on the runners behind a team of happy dogs, where everything felt right and the world around me stood still.

I’m very fortunate that so far I’ve been able to balance my everyday life in the Valley and parenting two young children with my need for adventure and self-exploration. I’m hoping that one day this can become a much bigger part of my life, but I’ll take what I can get for now. I’d now like to do a race or a long distance trip like the Fjallraven Polar.

Have you discovered a love for something unexpected? Or is there something you’d love to get out there and try? Tell us all about it below.

Into the green #3: Climbing Mount Shasta in winter - Life in the Bay

I press my nose against the airplane window, miles below us, a stark white cone appears from lush green hills, Mount Shasta, intimidating even from the sky. 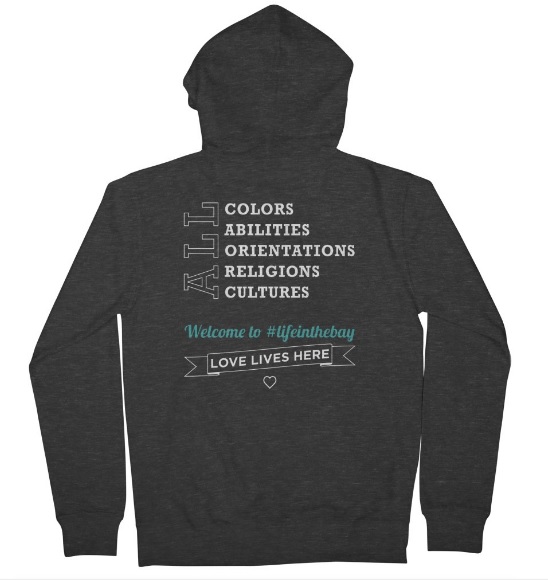